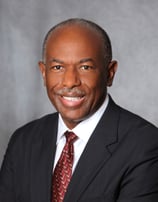 James E.K. Hildreth, Ph.D., M.D. is the 12th president and chief executive officer of Meharry Medical College, the nation’s largest private, independent historically black academic health sciences center. Dr. Hildreth obtained a B.A. in chemistry from Harvard University and was selected as the first African-American Rhodes Scholar from Arkansas. He obtained a Ph.D. in immunology from Oxford University where his studies focused on the biology of virus-specific cytotoxic T cells. Dr. Hildreth obtained an M.D. from Johns Hopkins University School of Medicine and took a leave of absence from medical school for a postdoctoral fellowship in pharmacology at Johns Hopkins.

In 1987, Dr. Hildreth joined the Johns Hopkins School of faculty as assistant professor. He was appointed as the first associate dean for graduate studies at Johns Hopkins in 1994. In 2002, Dr. Hildreth became the first African American in the 125-year history of Johns Hopkins School of Medicine to earn full professorship with tenure in basic sciences. In July 2005, Dr. Hildreth became director of the NIH-funded Center for AIDS Health Disparities Research at Meharry Medical College. In August of 2011, Dr. Hildreth became dean of the College of Biological Sciences at University of California, Davis. He was the first African-American dean in the university, which was founded in 1905. He was also appointed as a tenured professor in the Department of Cellular and Molecular Biology as well as professor in the Department of Internal Medicine in the UC Davis School of Medicine.

Dr. Hildreth’s research in immunology and virology, with a focus on HIV, has resulted in more than 120 publications in top journals and 11 patents. He has received numerous NIH grants to support his research including a prestigious NIH Director’s Pioneer Award. A technology developed by Dr. Hildreth was licensed by Genentech as the basis for the FDA-approved drug Raptiva.

Dr. Hildreth received numerous awards for his research, commitment to diversity in medicine, biomedical research and service to communities. His recognitions include honorary degrees, induction into the Arkansas Black Hall of Fame, the Johns Hopkins University Society of Scholars and election to the Institute of Medicine (now the National Academy of Medicine), part of the National Academy of Sciences.

Dr. Hildreth has led Meharry’s effort to support the city of Nashville’s response to the COVID-19 pandemic. He serves on the city’s COVID-19 taskforce and Meharry manages all of the city’s COVID-19 test centers, performing as many as 18,000 tests per week. Meharry is also doing mobile COVID-19 mobile testing at local churches. Dr. Hildreth led the effort to establish Meharry as a COVID-19 vaccine test site as part of Operation Warp Speed. Dr. Hildreth has emerged as a trusted leader in the fight against COVID-19 and has appeared numerous times in local and national print and broadcast media. As a trusted messenger, he is leading efforts to ensure that minorities enroll in COVID-19 vaccine trials and that they accept vaccines when they are approved and available. Dr. Hildreth has been appointed to the FDA’s Vaccines and Related Products Advisory Committee that will review COVID-19 vaccine trial data and make recommendations for approval to the FDA commissioner. President Biden appointed Dr. Hildreth to the White House COVID-19 Health Equity Task Force.

Dr. Hildreth has served on numerous national advisory boards including the Harvard University Board of Overseers. He currently serves on the Advisory Council to the NIH Director, the Veteran’s Administration National Academic Affiliations Council and the board of directors of the Association of Academic Health Centers. Dr. Hildreth serves on several other boards including chair of the board of the St. Jude Children’s Research Hospital Graduate School of Biomedical Sciences.

For questions, please email us at AdvaMedEvents@AdvaMed.org.