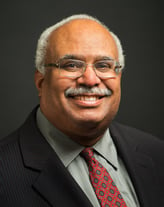 Georges C. Benjamin, MD, is the executive director of the American Public Health Association (APHA) since 2002 where he has been leading the Association’s efforts to make America the healthiest nation. He came to APHA from his position as Secretary of Health for the state of Maryland. Prior to that he served for four years as the state’s Deputy Secretary for Public Health Services. As a secretary, Dr. Benjamin oversaw a department with a budget of over $4.5 billion and 10,000 state and local employees. He was successful in expanding and improving the quality of the state’s Medicaid program as well and improvements in the health of Marylanders.

Dr. Benjamin is a graduate of the Illinois Institute of Technology and the University of Illinois College of Medicine. He is board-certified in internal medicine and a Master of the American College of Physicians. He is the author of more than 160 scientific articles and book chapters. His recent book, The Quest for Health Reform: A Satirical History is an expose of the nearly 100-year quest to ensure quality, affordable health coverage for all through the use of political cartoons. Dr. Benjamin is a member of the National Academy of Medicine of the National Academies of Science, Engineering and Medicine. He also serves as a board member of various organizations to include Research!America, the Reagan-Udall Foundation, the Environmental Defense Fund, and the Truth Initiative. In 2014 and 2008, he was named one of the top 25 minority executives in health care by Modern Healthcare Magazine, in addition to being voted among the 100 most influential people in health care from 2007-2018 and one of the nation’s most influential physician executives from 2009-2015. He is also a former member of the National Infrastructure Advisory Council, a council that advises the President on how best to assure the security of the nation’s critical infrastructure. 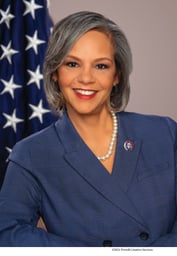 Congresswoman Robin Kelly has dedicated her career to public service as an advocate for Illinois families.  Since being elected to serve the 2nd Congressional District in 2013, she has worked to expand economic opportunity, community wellness, and public safety across the state, championing numerous initiatives to generate job growth, reduce health disparities, and end gun violence.

A staunch champion of common sense gun reforms and responsible community policing, Representative Kelly is a Co-Chair of the Congressional Gun Violence Prevention Taskforce and is the author of The 2014 Kelly Report on Gun Violence in America, the first-ever Congressional analysis of the nation's gun violence epidemic that offers a blueprint for ending the crisis.

Prior to her election to Congress, Kelly was a member of the Illinois House of Representatives, served as Chief Administrative Officer of Cook County (the second largest county in the United States) and was Chief of Staff to Illinois State Treasurer Alexi Giannoulias - becoming the first African American woman to serve as Chief of Staff to an elected constitutional statewide officeholder.

The daughter of a small business owner and postal worker, Congresswoman Kelly moved to Illinois to attend Bradley University in Peoria, where she earned her B.A. in psychology and an M.A. in counseling. She later received a Ph.D. in political science from Northern Illinois University.  She lives in Matteson with her husband, Dr. Nathaniel Horn, and has two adult children, Kelly and Ryan.

For questions, please email us at AdvaMedEvents@AdvaMed.org.